How To Read and Follow Trail Blazes in North America 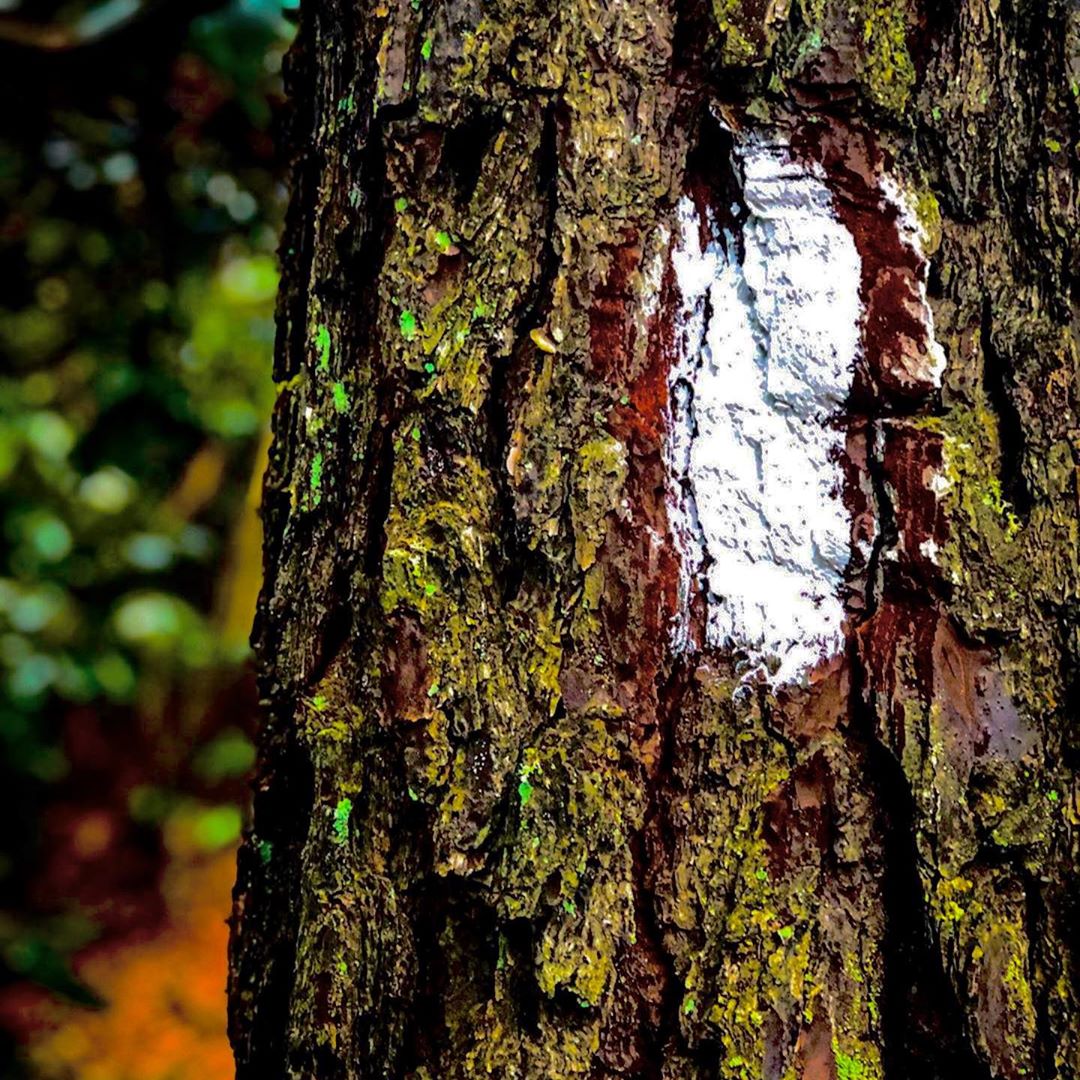 For many beginning hikers, the excitement of exploring a great trail is often tempered by anxiety about becoming lost along the way. However, you don’t have to be intimidated by the National Scenic Trail system or worried that you’ll be lost. Nearly every public trail has a system of navigational symbols (called trail blazes) that can help you easily navigate the trail.  In this blog post, I’ll show you have to read trail blazes and how to use them to find your way.

Especially in the United States and Canada, trails are planned, built, and maintained so that hikers can safely travel from trailhead to summit (and beyond). To aid hikers in navigating the trail, a system of trail markers called blazes are used to help mark the beginning and end of a trail, a change in direction along the way, or an intersection of trails.

Blazes (also known as trail markers) are usually placed at eye level – or slightly higher on trails that receive moderate snowfall – and frequently appear painted onto trees, rocks, or posts along the trail. For painted blazes, they generally are 2 inches wide by 6 inches tall. In areas where several trails intersect, trail markers may vary by shape – such as diamonds, triangles, or circles – and colors. You can expect some general variation in trail markers above the tree line such as alpine trails, which we will discuss below.

Generally, you should anticipate seeing a trail blaze at least every tenth of a mile apart, but no further than a quarter-mile apart. If you have been walking for a half-mile or more without seeing a trail blaze, you may have lost the trail. You should check your paper map with a GPS or compass or turn back to locate a blaze on the trail.

TRAIL BLAZE COLORS AND THEIR MEANING

The color of the blaze is also meant to communicate information to hikers. Trails are blazed with a uniform color for the duration of the trail, meaning – as long as you follow that specific color – you are staying on that trail. For example, blazes on the Appalachian Trail are uniformly white. On the Florida Trail blazes are uniformly orange. Blazes along the Pinhoti Trail are yellow.  Many trails in the United States and Europe use two-color blazes, such as red/white or blue/white.

Before you depart, confirm the color of the trail(s) you will be following and carry a paper map with compass.

Intersecting trails (or spur trails that cross the main trail path) will be blazed with a different color. While there is no uniform system of coloring these spur trails, the color used may communicate some additional details. For example, many of the yellow blazed spurs that intersect the Appalachian Trail lead to a main road.

HOW TO READ TRAIL BLAZES

Trail blazes are intended to quickly and easily communicate what is coming up on a trail. For this reason, I suggest you generally “read” a trail blaze from bottom to the top. This makes it easy to understand where you are in relation to any change further up the trail. 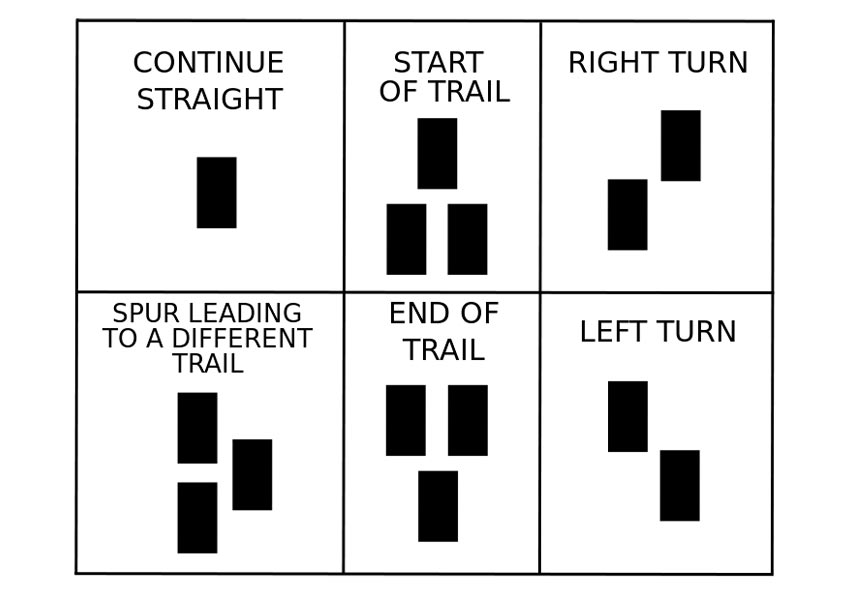 One less common blaze marking is a double blaze, one above the other. This unusual marking means that you should pay particular attention to the trail while traversing ahead through what may be a more challenging area to navigate. 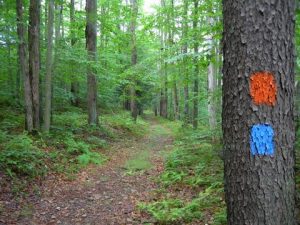 When two trails share the same path, there can be some unusual markings in place. In some instances, the two trails may be co-blazed, meaning that the blazes for each trail appear together.

For example, presume that you have a two trails on the same path (an orange trail and a blue trail). One way the trails may be marked is with a double blaze, meaning that the orange and blue appear on the same tree or post. A “continue straight” may have the orange above the blue (as seen in this photo) or the two “together” in some other configuration such as touching side by side.

Well-marked shared paths can be easy to follow when well marked; however, you may still wish to review your paper map with a compass to be sure you are following the correct trail.

Above the tree line, it can be difficult to place painted blazes consistently. A more common marker, especially in rocky areas, is stacked stone marker called a “cairn” or “duck”.

If you are hiking in Europe or the United Kingdom, most trail markers will have directional arrows to indicate turns along the trail. There can be some confusing signage along the way, especially when two trails converge or run concurrently, so a paper map and compass is highly recommended in even well marked areas.

A LAST WORD ON TRAIL NAVIGATION

Whether you are new or experienced hiker, there is no substitute for a paper map and compass, as well as a reliable GPS that has been pre-loaded with maps for the area you are hiking. Do not presume that blazes will be reliably available for all trails. The vast majority of accidents and fatalities occur when hikers wander off trail and are unable to find their way – even just a few hundred feet from the established trail. 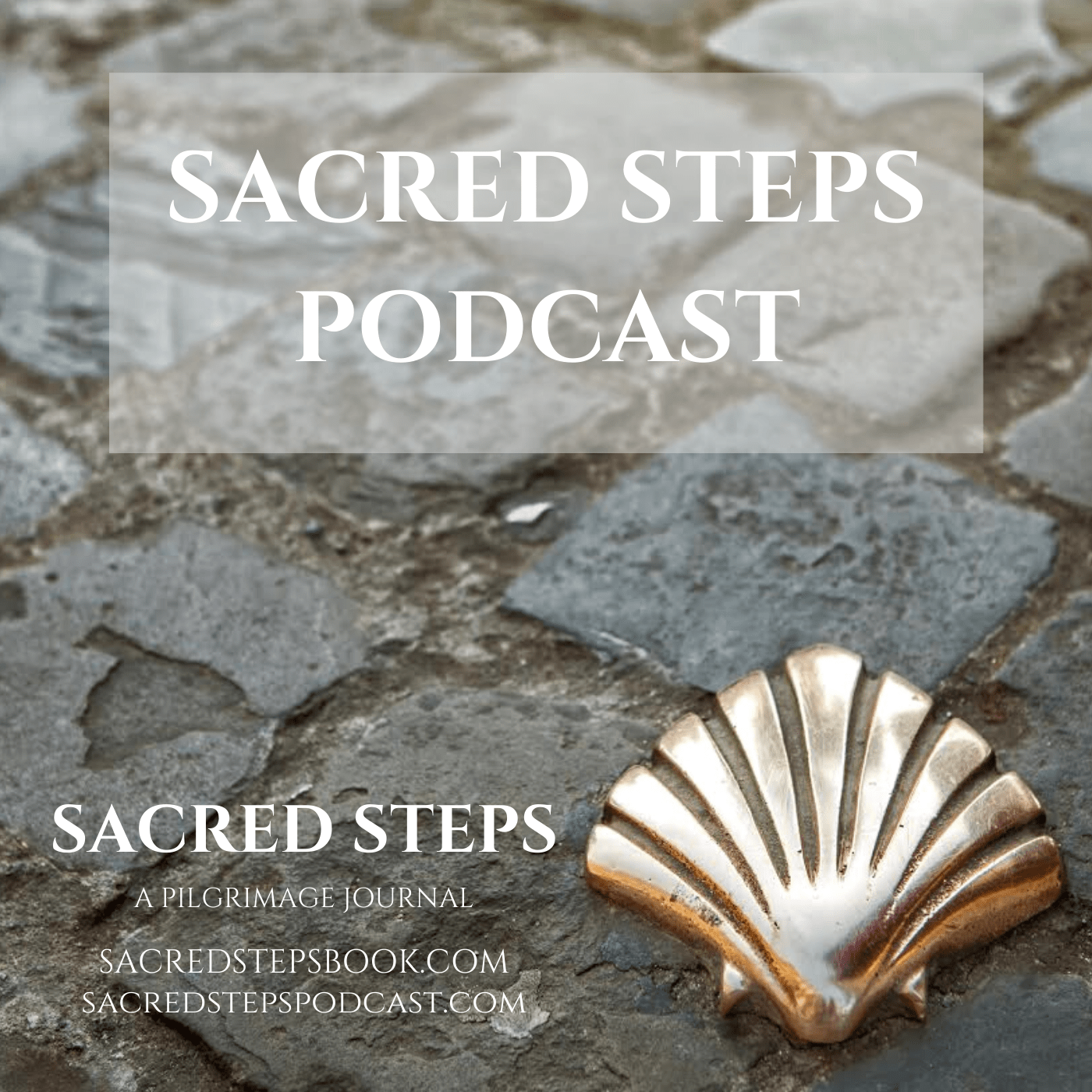